This project began in the summer of 2015, when six Misericordia University students worked closely to develop a public history exhibit that showcased social life in post-WWII Pittston, PA.  The project was generously funded by a presidential initiative, under the leadership of Dr. Thomas Botzman, to foster mentorship between faculty members and undergraduates in a Summer Research Fellowship (SSRF) Program.  With support from Arts & Sciences Dean Russ Pottle, the project took shape under the direction of Dr. Jennifer Black, Assistant Professor of History & Government.  Dr. Black worked directly with Ron Faraday, Director of the Greater Pittston Historical Society and Misericordia Alum, to plan and shape the work undertaken by her students over the course of ten weeks that summer.   Our first online exhibit, Mining the Past, showcases the work of that first group of students. 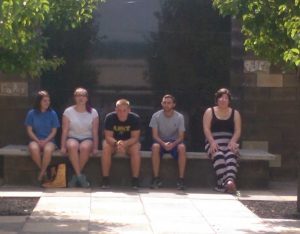 Since then, the public history endeavors at Misericordia University have taken a variety of shapes, including oral histories and other service-oriented historical research.  We also feature students’ professional experiences at internship sites in the local Wyoming Valley, Baltimore, and Washington, DC.

Jennifer M. Black is Associate Professor of History & Government at Misericordia University in Dallas, PA.  She holds a PhD in American History and Visual Culture from the University of Southern California, as well as a BA in Art History and an MA in Public History.  She joined the faculty at MU in 2014, after working as a public history consultant for the American Society of Mechanical Engineers. She can be found on the web at: jennifermblack.org.

Allan W. Austin is Professor of History & Government at Misericordia University in Dallas, PA.  He holds his PhD in American History from the University of Cincinnati. He joined the faculty at MU in 2001.  Dr. Austin edited the “Back Mountain Oral History Project” (2006), supported by grants from the Pennsylvania Historical and Museum Commission and Misericordia.  He has also published two monographs—From Concentration Camp to Campus: Japanese American Students and World War II (2004) and Quaker Brotherhood: Interracial Activism and the American Friends Service Committee, 1917-1950 (2012)—and served as editor on book projects dealing with Asian American history and science fiction television.

Funding for many of these projects was generously provided by the Misericordia University Summer Undergraduate Research Fellowship Program (SURF, formerly known as SSRF), the College of Arts and Sciences, and the Soyka Fund for the Humanities.

We would like to express their gratitude to those who supported the projects and student research featured here: