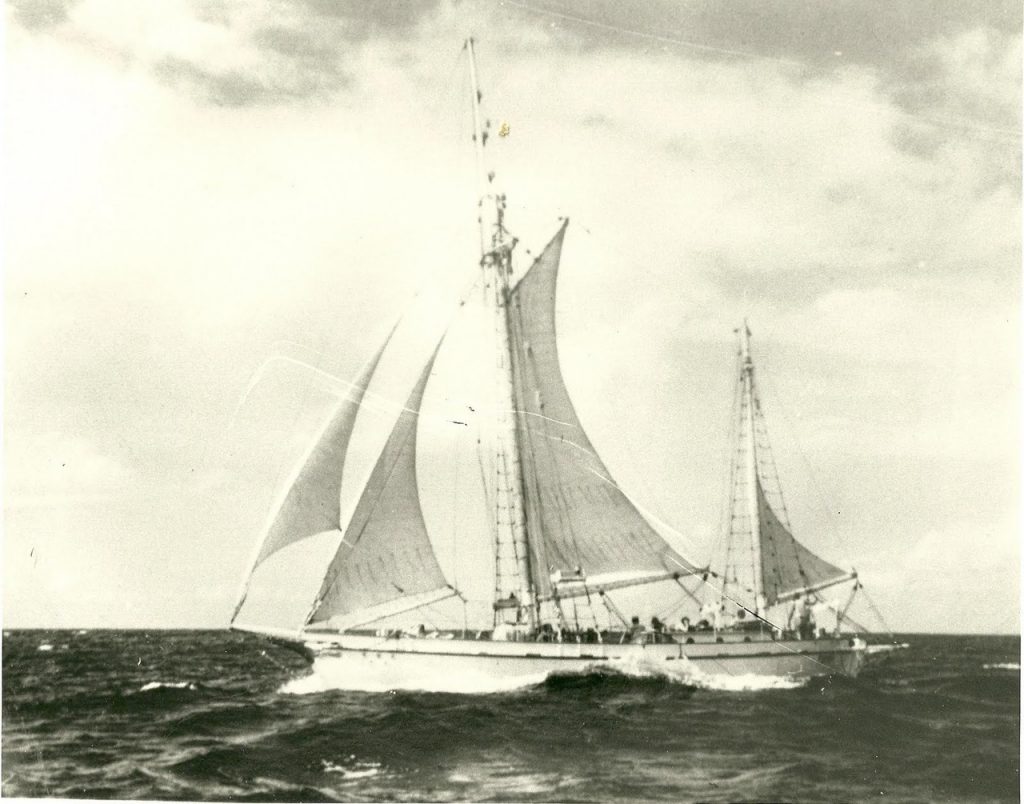 The Phoenix in 1954. This boat would later take Quaker Action Group members to Haiphong, in an illegal trip to deliver supplies to North Vietnamese civilians in 1967. Available online at: http://www.atlasobscura.com/articles/the-american-boat-that-sailed-to-vietnam-during-the-warthen-disappeared

The American Friends Service Committee (AFSC) has long been committed to promoting peace and preserving human life, and by the early 1960s that commitment led it to organize against the conflict in Vietnam. This effort began with extensive letter-writing campaigns and draft counseling that the Quakers provided for draft-eligible young men, but later evolved into protests, lobbying, and efforts to provide humanitarian aid to both North and South Vietnam. As historian Catherine Gillette noted, the AFSC’s “activism was bold, effective, and consistently non-violent.” By the late 1960s, and especially in light of the seemingly endless war in Vietnam, the AFSC had grown tired of the human costs generated by what it believed was an unnecessary conflict. AFSC leaders thus decided to do something radical, challenging U.S. State Department restrictions on American charitable organizations at the time. In 1967, the AFSC and A Quaker Action Group (QAG) sponsored the covert voyage of the Phoenix, a ship whose mission was to help the victims of the war in North Vietnam, especially in Haiphong. This dangerous undertaking ultimately symbolized the AFSC’s unwavering support for peace.

In 1967, a contingent of AFSC members formed QAG to aid the organization’s efforts to protest the U.S. war effort in Vietnam. In previous decades, the AFSC had provided aid to civilians impacted by war. Doing so in 1967, however, was complicated, as the United States had made it illegal for its citizens to help war victims in North Vietnam. Seeking a way to circumvent such laws and to deliver needed medical aid to the North Vietnamese, the AFSC quietly set up QAG, an invisible branch of the AFSC that the government couldn’t tie to it. Using this active and incognito group, the AFSC could get to work helping the people of North Vietnam.

The voyage of the Phoenix, then, reveals the AFSC’s unbending commitment to peace activism and justice for humanity. AFSC leaders believed that life should be preserved, and not destroyed by war or political agendas. The Quakers who sailed onboard the Phoenix showed their commitment to the AFSC’s values by putting their own lives on hold, breaking United States law, and helping the North Vietnamese. Their courage should not go unnoticed. 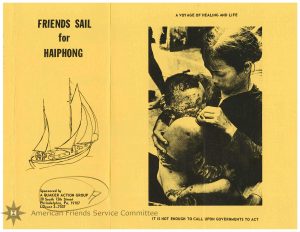 A Quaker Action Group. “A Voyage Of Healing and Life” (1967),  courtesy of the American Friends Service Committee Archives.

This pamphlet was designed by QAG in 1967 to raise money for its secret voyage to Haiphong, Vietnam. On the front of the pamphlet, the viewer’s attention is immediately drawn to the infant and the young woman. The baby is badly wounded, with cuts and gashes all over his face, right ear, and bottom–likely the result of bomb shrapnel, which would have spewed forth from one of the many explosions ripping through the North Vietnamese countryside. The young woman’s expression demonstrates strength, or perhaps unfazed familiarity. The text on the pamphlet is very telling: the heading states “A Voyage of Healing and Life,” pointing to the goal of the Phoenix voyage to help those damaged by the Vietnam War. The use of the young woman and baby provokes an emotional response from the viewer, pointing to a horrible and dramatic event that damaged these two innocent human beings. Their surroundings are chaotic and unstable, and the implied message is that they deserve to live in a peaceful environment. 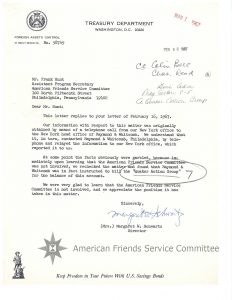 This letter was written a little over a month before the Phoenix voyage. It is addressed to Frank Hunt, Assistant Program Secretary at the AFSC, and points to the challenges the AFSC faced when attempting to navigate U.S. government policy given the Quakers’ goals of providing humanitarian aid to war victims. The letter comes from Margaret W. Schwartz, a treasury agent in the Foreign Assets Control Division, who was investigating the AFSC and QAG for illegal activity. In previous letters, the Treasury Department had asked the AFSC to prove that it had no involvement with the Phoenix voyage to Haiphong. After numerous letters and phone calls to AFSC offices, the government finally gave up, deciding that the issue represented nothing more than a misunderstanding based on “facts that were garbled.” Schwartz writes, “We were very glad to learn that the American Friends Service Committee was not involved, and we appreciate the position it had taken in this matter.” The letter proves that the Quakers were willing to violate United States law to make their voyage successful. As the letter shows that the government could find no violation of the law by the AFSC, it suggests that the AFSC had eluded the government’s accusations of their working with QAG. 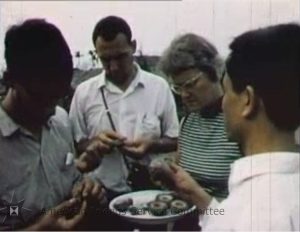 Screen shot from A Voyage of the Phoenix (Canadian Broadcasting Corporation, 1967). Courtesy of the American Friends Service Committee Archives.

This documentary and propaganda-like film, A Voyage of the Phoenix, was created by William Heick for the Canadian Broadcasting Corporation in 1967. The film describes the crew and their commitment to peace activism as North Vietnamese civilians show the Phoenix crew the fear that the North Vietnamese lived with every day. The film also follows the crew as they delivered medical supplies and explored the towns that had been destroyed by U.S. bombs. In this shot, we see North Vietnamese villagers showing the Phoenix crew the destructiveness of war. They gather around a very large shell of what once was a U.S. bomb casing, which held over 300 smaller explosives inside, as explained by the narrator. When the canister hit the ground, the mini-bombs would explode, causing damage to anything and anybody around it, like the infant in the QAG pamphlet. Despite the political tensions between the U.S. and North Vietnam, these North Vietnamese villagers cooperated with the American Quakers. The war-torn people were eager to explain what had happened, and wanted to educate the Americans who had come there to help them. Here, the Vietnamese welcomed the Quakers into what was left of their town. The voyage thus not only provided physical aid to the North Vietnamese, it also educated the Phoenix crew and viewers of the documentary by cultivating compassion towards the North Vietnamese among the Americans.