Well this week was the week! The last days were spent in preparation with last minute details such as making sure each picture and case had label and that all of our tools were cleaned up so that way the space did not look messy. One of the things that I really enjoyed this week was that I made the layout to the photo contest photographs on my own. Once I made a mock up of what they should look like on the wall I then started to place them on the wall. Once it was finished, I loved the way it looked. 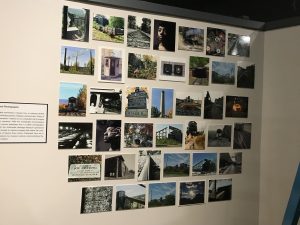 Then, later on at night was our grand opening for VIP Members. I would have to say that it was a success. I was hoping for about thirty people to show up but we ended up having fifty people! That was a huge success and even better, everyone there enjoyed the exhibit. That was the main concern of everyone as I learned in the past exhibits AHM has produced, there were always a few complaints. Now it is time to look to Saturday as that is the official public opening and since we did not do an RSVP to that event, we have no clue as to how many people will be coming.