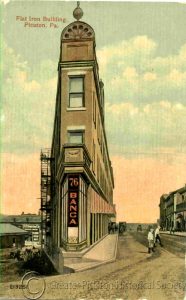 At the intersection of Kennedy Boulevard and North Main Street in Pittston, PA, stands a small patch of grass on a roadside embankment. Today, motorists pass by the site without as much as a glance.  But for the first half of the twentieth century, the site was home to one of the most iconic buildings in the area: the “Flatiron,” which housed businesses and shops at 76-114 North Main Street. The building earned its distinct nickname because it was constructed in the shape of a flat iron, a heavy slab of metal with a flat and smooth bottom used to press clothing. The building was constructed between 1903 and 1906 and was demolished in the late summer of 1962. Throughout that time, many small business such as barbers, clothiers, and grocers occupied the space. Two of the more notable businesses that existed in the Flatiron building were Allan Smiles’ sporting goods store and a private bank owned and managed by Mr. Joseph Ferrarini.

The narrowest point of the Flatiron building, at the address 76 North Main St., housed a private bank owned by an Italian immigrant named Joseph L. Ferrarini. Ferrarini became involved in the banking business in the first decade of the twentieth century through his brother-in-law, Joseph Sordoni, who operated a banking business in the Flatiron building and named Ferrarini as its manager[1]. Sordoni was a well-known leader among Italian immigrants in Pittston, and was often looked to for business and personal advice. Following his death in April of 1907, Sordoni passed his highly acclaimed business and its clientele to Ferrarini, who continued his own bank at 76 North Main St until 1918[2]. During that time, Ferrarini became as well-known and respected as his former partner, Joseph Sordoni. Ferrarini was a trusted man in Pittston, and people often turned to him with their personal issues. He was also chairman of the Italian Consul for the Scranton and Pittston area, an ethnic organization akin to a benevolent society, and thus helped create a voice for Pittston’s Italian citizens[3]. For example, in 1910, when Pittston resident Matti Pignata shot and killed his brother, Sylvester Pignata, he hid among friends in the community. An unknown person made Ferrarini aware of Pignata’s circumstances, and  Ferrarini went to  Rev. William Gilson of Our Lady of Mt. Carmel to seek out Pignata and encourage him to confess. Pignata, accompanied by Ferrarini and Rev. Gilson, approached the mayor’s office and confessed to the murder of Sylvester Pignata. Ferrarini, like Sordoni before him, was thus a leader among Pittston’s Italian citizens. In Pignata’s case, Ferrarini helped to translate between Matti and the court[4]. With Ferrarini’s growing success, he was hired as the President of Liberty National Bank in 1920, which caused him to leave behind his starter business in the Flatiron building. The Colonial Flower Shop filled the vacancy of 76 North Main left by Ferrarini and remained in operation from approximately 1921 to 1939.

Like Joseph Ferrarini, Allan W. Smiles was a dependable and trustworthy business owner who began a business in the Flatiron building that provided superb service to the citizens of Pittston. When athletes or sportsmen wanted to get ready for an upcoming season, they went to Al Smiles. According to an article that highlighted the business’ forty-eighth year, “Al Smiles is probably known by every sportsman in the Wyoming Valley… every hunting and fishing enthusiast in the region has probably been in Allan Smiles’ store.”[5]  Throughout its fifty-year run, Al Smiles’ Sporting Goods had countless advertisements in the Pittston Gazette, and Smiles had a knack for using current events in Pittston to his business’s advantage. In 1915 he took advantage of the streetcar strike by running an ad that stated, “Don’t let the streetcar strike worry you. Buy a bicycle.”[6] He sold a wide range of items, from roller skates and hockey sticks to shotguns and ammunition. Hunters and fishermen could get their licenses for the upcoming season at Al’s. Local residents of Pittston who were planning a camping trip stopped into Al’s to purchase sleeping bags and tents, while hopeful sluggers depended on Al’s to get ready for the upcoming baseball season. Allan Smiles understood what athletes needed in order to perform at a high level because he was an athlete himself. He was born in Old Forge, PA, in 1892 and moved to Pittston soon after. In 1906, Smiles competed in the Pittston’s YMCA Athletic Contest, which included several events, such as the standing broad jump, running broad jump, pull-up, standing high jump, springboard high jump, under-swing for distance, and pole vault.[7] 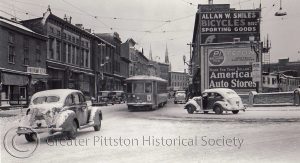 Advertisement for Allan Smiles’ Bicycle and Sporting Goods store on the rear of the Flatiron building. Courtesy of the Greater Pittston Historical Society.

As a business man, Smiles created strong ties within the community by sponsoring many events. In 1934, Smiles, along with several other businesses, contributed awards to the winners of the Troback Gun Club’s shooting contest at Corey’s Glen, a strip of recreational lands near Harding in Exeter Township. Then, in the 1950s, Al Smiles’ Sporting Goods sponsored a team in the annual merchants’ basketball league at the YMCA. The league was highly competitive and featured many ex-high school basketball stars including Shorty Branas, Buckey Mazur, and Cookie Salvo. Al Smiles’ team was consistently one of the worst teams every year, but these games were worth watching because as one author stated, “present high school performers could learn a few lessons witnessing these tussles.”[8]

Like all good businessmen, Al Smiles knew how to get his fair share of free advertising. He had good relationships with local writers who found ways to work his store into their columns. For example, in a 1961 column entitled “The Old Outdoorsmen,” the columnist prepared readers for the upcoming trout season. In this column, he let readers know that “Harvey’s Lake is the best bet for dads who will want to break the youngsters into the wholesome sport of trout fishing.”[9] The column suggested some “must haves” in order to catch an abundance of trout. The writer said that “last night” he picked up some Gordon Quill, Light Hendrickson, and Blue Quill at Al’s. Whether commissioned by Smiles or simply doing him a favor, the writer could likely expect to receive some extra Blue Quill for mentioning Al’s store in his column.

Al Smiles had his share of challenges and tough situations throughout his fifty years of business, including multiple robberies over the years. In 1929, a nineteen-year-old man named George Brelonis was charged with breaking into and robbing Al Smiles’ Sporting Goods. The next month the store was robbed again, in a string of crime that included five other robberies that occurred within days of each other. This time a sixteen-year-old, Charles Romanaski, was arrested with a new 25 -Caliber Colt Automatic. Al Smiles identified the gun as having been stolen from his store “after a nocturnal visit by the infamous ‘brace and bit’ gang” [10]. Then, in 1959, Al’s place almost burned down. Firefighters threw ignited boxes containing rifles out of the second floor window after the building caught fire from a faulty light bulb. Though his business survived the fire, Smiles himself died unexpectedly from a heart attack in 1960. 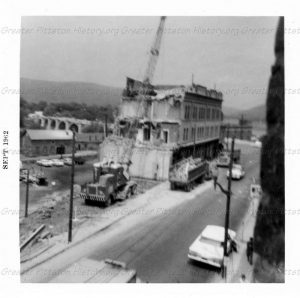 Demolition of the Flatiron building in September of 1962. Courtesy of the Greater Pittston Historical Society.

In the summer months of 1962, demolition of the beloved Flatiron building began. Little information concerning the reason for its demolition can be found. The Pittston landmark stood for approximately 57 years and housed a variety of small businesses and the two very well-known businesses of Joseph Ferrarini and Al Smiles. The building’s removal made way for the construction of Kennedy Boulevard. Though Pittston residents would miss the familiar and iconic building, they understood the importance of innovation in society. Pittston resident Joseph Mullarkey said, “It’s a shame to see a landmark removed, but it will mean progress” [11].

[11] The Sunday Dispatch. “Peeking Into the Past.” Accessed July 29, 2016. http://psdispatch.com/features/28805/peeking-into-the-past-pittston-historical-marker-commemorated-58-men-entombed-in-twin-shaft-disaster-of-1896. Web.

“Slayer of His Brother Surrendered to the Police” Pittston Gazette. August 29, 1910. Web.