Voices of the Emergency Peace Campaign

The American Friends Service Committee’s (AFSC) Emergency Peace Campaign helped to establish key patterns for providing humanitarian aid and pursuing antiwar activism for decades to come. Beginning in 1936, the Emergency Peace Campaign publicized the political and economic tensions of interwar Europe, including the Spanish Civil War. Motivated by their religious commitment to pacifism and terrified that such events might result in another world war, the AFSC’s Emergency Peace Campaign gave new groups a voice that they had never had before, building momentum for the peace movement and encouraging numerous people to join its ranks. Emphasizing the themes of sacrifice, political mobilization, and public activism, the campaign ultimately saw broad success in mobilizing the pursuit of the fundamental AFSC goal of peace.

Despite having only recently been formed in 1917, by the early 1930s the AFSC was well on its way to establishing itself as an international humanitarian organization. Following World War I, the group organized and sent college students abroad to help rebuild civilian homes and infrastructure. In undertaking a broad range of reconstruction projects in France, the AFSC established an important precedent that would set the tone for its humanitarian activism throughout subsequent decades. Service Committee efforts in France eventually led to an even broader outreach, as members moved to provide famine relief inside the Soviet Union. As a board member noted, “we should let our deeds carry our message.”

Remembering the pains of World War I, the AFSC coordinated the Emergency Peace Campaign in making a courageous argument for peace and the protection of “Veterans of Future Wars.” Vocalizing the Quaker commitment to pacifism through the Emergency Peace Campaign thus provided an important step for the nascent AFSC as it became an ever more prominent global actor for change. Facing daunting obstacles, the AFSC rose to the occasion, using Elbert M. Jackson’s painting, a clearly established set of objectives to pursue, and a series of public events to provide a much needed voice to those who often felt voiceless in this era. 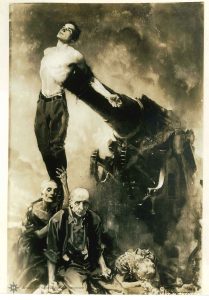 Photograph of Elbert M. Jackson, For What?, oil on canvas (c. 1935), courtesy of the American Friends Service Committee Archives.

In this photograph of the painting, For What? by Elbert M. Jackson, we see a young man strapped to a mortar cannon, with his parents and wife weeping below him. The background features the fog of war, which threatens to slowly consume the young man. The painting echoes the sacrifices of the young men who died in World War I, and foreshadows the gloomy fate awaiting the next generation of American soldiers—the “Veterans of Future Wars,” as the Campaign referred to them. Unable to vote yet eligible for the draft, the man’s bleak future also parallels the future of the American nation as a whole, should another world war break out. The heavy shadows creeping around the figures add a sense of melancholy, suggesting a foreboding feeling of disappointment in the anticipated loss of human life and its effect on loved ones. The title itself—For What?—questions what gains the nation might achieve in entering new wars, especially in light of the young man and those close to him, who seem destined for a future of grieving and loss.

One of the strategies of the Emergency Peace Campaign was to hold “Peace Institutes” and rallies in various cities across the United States, which served to create a united front that brought people out in droves to support the cause. In 1936 alone, over 300 cities participated in events linked to the Peace Campaign. As this map shows, such broad activism foreshadowed an increasing AFSC presence from coast to coast. Ticket pricing encouraged Friends to invite others to become involved, offering bulk rates for tickets purchased in packs of ten. This pricing strategy aimed to help build a movement as people shared tickets with friends and family. 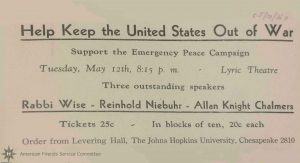 Ultimately, the Campaign’s seminars, institutes, and rallies invited a much larger and more diverse group of constituents to listen to the AFSC’s message and to participate in the conversation about peace, connecting the AFSC with the voice of the broader public. 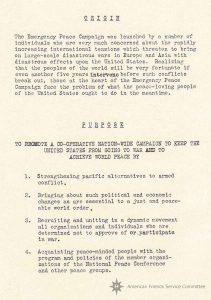 In 1936, the AFSC presented this mission statement to its broader membership, suggesting the goals that might be pursued as part of the Emergency Peace Campaign. The suggestions provide insight into the Service Committee’s approach to activism, which emphasized diplomacy, political and economic reform, and bringing together diverse populations who might share in the mission for peaceful alternatives to armed conflict. This networking drive sought to provide a significant voice to both older men and women, whose right to vote opened opportunities unavailable to those under twenty-one. Importantly, this project would have likely included women, who had received the right to vote only sixteen years earlier and now had the opportunity to take a political stand against war. In reaching out to diverse constituents in this way, the AFSC’s campaign expanded the size and power of the peace movement while achieving significantly more public attention.