The Reformation of Public Memory:

During World War II, the Japanese military established a series of “comfort stations” to serve the sexual needs of its soldiers.  According to official governmental accounts, the stations were established to prevent violent civilian rapes and to control the spread of sexually transmitted diseases among soldiers.  Following the war and for decades after, even the most affected communities regarded these women as “military prostitutes,” and saw them as a disgrace by their respective cultures. Even today, there are still arguments and denial over the use of comfort women, stating that many women participated of their own free will.  However, evidence gathered since the early 1990s has revealed that the Imperial Japanese military used comfort women as sexual slaves.  The Japanese government and military collaborated to establish the comfort station system, and coerced, kidnapped, and otherwise “procured” women to staff the brothels.  In this way, the Japanese institutionalized sexual violence against women living in the regions controlled by the imperial regime.   A campaign to secure redress for the survivors began in 1992, and through the dedicated efforts of the victims and others, this campaign has been successful in reshaping public memory around the comfort station system. 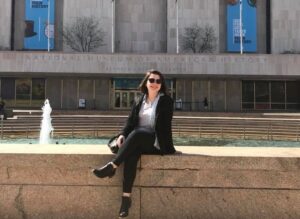 Sara Shields is a History major with a specialization in Public History. She has completed internships at both the Anthracite Heritage Museum in Scranton, PA, and the Sister Mary Carmel McGarigle Archives at Misericordia University. She has curated three exhibits in her time at Misericordia, including Last Hired, First Fired: African Americans During the Great Depression, Life and Legacy: Sister Miriam Gallagher, RSM, and The Reformation of Public Memory: Comfort Women’s Campaign for Redress.