With the arrival of immigrants in the nineteenth century, the population and the economy of Pittston created an ideal environment for the garment industry to prosper. It’s legacy has remained a key part of Pittston’s heritage and culture. Although many of the original storefronts have been torn down, their memory lives on through the town’s rich history as a thriving entity.

Clothiers in Pittston took on several different names from 1887 to the present. Makers would adjust their products to keep the people of Pittston in the most fashionable styles of the time. The earliest directory records available from the 1880s have fashion terms such as “cloakes” and “capes” for men, and “dressmakers” for the women. As Pittston entered the twentieth century, some of these words were being dropped, like “cloakes” and “clothing,” giving way to “clothiers.” The gradual expansion of clothiers in Pittston signalled a shift away from traditional types of clothing made in the home as more ready-made goods became available for both adults and children. The most significant change in Pittston’s clothing industry came around 1920, with the rise in popularity of “retail clothing” (i.e. mass produced items), as opposed to the custom garments produced by a clothier or tailor in previous years. Retail stayed in demand for quite some time, and pieces of it are still around today, but it was just the beginning. Department stores came in during the 1980s and caused financial difficulties for smaller businesses like Corcoran & O’Brien[1]. The latest shift in the industry has been the rise of “superstores” such as Walmart, Kmart, and Target, which sell everything a customer needs in one place. Pittston has kept up with the times, seeing branches opening at different places in their city.

Main Street in Pittston became the hub of the retail clothing industry in the area. Nineteenth- and twentieth-century Pittston city directories show that there were an average of 40 clothiers, dressmakers, and tailors on Main Street from 1887 to 1927. The year 1915 witnessed the height of the clothing industry in Pittston with 79 total clothiers, an indication of what would be the boom of retail only five years later[2]. Most of the merchant tailors and retail stores opened their businesses along the main street[3]. With all the stores in such a close vicinity, the competition in the clothing market reached its peak in the early twentieth century. Each business strived to be in tune with fashion trends while maintaining a fair price. Yet while Main Street drew clothing shops of all varieties, tailors and dressmakers were more likely to work out of their own homes in these years. Pittston’s garment industry was made of many different sectors, including tailors, dressmakers, milliners (women’s hat-makers), haberdashers (men’s clothiers), and children’s clothiers. To supply materials to everyone in the business, there were several garment factories just outside of Greater Pittston, some reaching out as far as Wilkes-Barre. Many women from Pittston were employed in these factories[4]. Some women were also commissioned by factories to work from home, getting paid by the article that they produced, rather than by the hours they worked. While women in the garment industry tended to work in factories or at home doing piece-work, young men tended to work in the retail sector[5]. 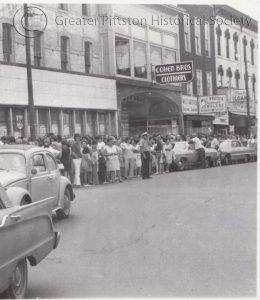 Though there were many stores in competition for customers, there were a few stores that were more successful and stood out from the crowd. Two of Main Street’s leading clothing stores were Cohen Brothers Clothiers and Corcoran & O’Brien. One of the early clothiers in Pittston, Cohen Brothers Clothiers opened in 1895. Morris and Sam Cohen, two brothers, were among the many merchant tailors in the city. After nine years of laying the groundwork for their business, the brothers opened their original retail store[6]. The Cohen Brothers strived to make the best quality clothing for the most affordable price, as evidenced by their advertisements. In the Spring of 1921, the Cohen Brothers listed their Easter sale, stating “Splendid values…here’s where you will find the famous Cohen Bros. quality as high as ever[7].” It is unknown what year the store closed. The last newspaper article available was from December of 1961 that read, “Merry Christmas to everyone [from] Cohen Bros. –and their sales staff[8].” The reason and timing of the store’s closure remains unclear.

Competition between clothing stores in the region was deeply felt. An example of this can be seen from 1920, when the Cohen Brothers were the subject of an intellectual property lawsuit after the owners of “The Hub Clothing Store,” located in Wilkes-Barre, alleged that the Cohen Brothers had renamed their store “The Hub” in order to “injure their business and confuse the public.” All allegations were dropped when it was ruled that the name “Hub” was common and no single person had exclusive rights over it[9]. This kind of dispute happened quite often, as each of the stores in the area struggled to be number one.

Another well-know Pittston store, Corcoran, O’Brien, & Tigue, was founded around 1894. Mr. Tigue left his share of the business shortly after his marriage to Mame Burke in January 1900, leaving the other two partners to build a successful business that would last to the end of the century[10]. Corcoran and O’Brien’s business became famous in the region for their tailoring and quality-made clothing for boys and men, gaining the title of “Pittston’s Leading Clothing Store” by 1904[11]. Their most popular products were custom-made suits and shirts.

Throughout its near century of service, Corcoran & O’Brien became a fixture of the local community and continued as a family business into the early 1990s. As Blair Corcoran, the founder’s grandson notes, by that time many clothing stores in the area had been forced to close due to the encroaching business of the large department and discount stores, which were gaining popularity in the area. Like other former boom-towns across the US, Pittston saw many local businesses close in the 1990s, citing changing markets, shifting consumer bases, and financial instability as their leading reasons for closure. Corcoran & O’Brien was one of the many stores in Pittston that closed in those years[12]. Though they were competitors, the stores seemed to all close their doors together. Blair Corcoran mentions in his interview that he saw many of the stores closing around him, so he decided it was time to shut his doors as well[13] .

Though the glory days of Pittston’s garment industry are over, the city still looks for ways to move forward with the changing times. With the local economy on the rebound, there may be another chance for a revival ahead, not just in the clothing industry, but in the retail district as a whole. Locals have described a time in decades past when Pittston was a mini-metropolis, and a great place to live[14], and there are continuous revival efforts being made by the community. Perhaps sometime soon the city of Pittston will once again become the bustling city it was years ago.