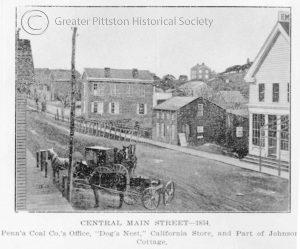 The Wyoming Valley was initially settled in 1769 by Connecticut settlers, who divided the land into five townships. Each township was five square miles.[1] The settlers were given the land to live there and they later became permanent settlers. In 1770, the first log cabin was built in then-Pittston Township (on what would now be the border of Duryea / Old Forge). From its founding in the 1770s through the mid-1830s, Pittston remained a small agricultural and mining community, until the expansion of a system of canals integrated it into the growing industrial centers of New York and Philadelphia.  By the mid-nineteenth century, the anthracite coal industry was growing exponentially, and Pittston eventually incorporated as a borough in 1853, and a city in 1894.[2]

City Hall was first placed at 14 Water Street in Pittston. Pittston is governed by a five member city council comprised of four elected city councilmembers and the elected mayor, who, in addition to being the presiding officer of the city council, holds executive authority. A city administrator oversees the normal day to day work being done throughout the city.  According to the Sanborn fire insurance maps from 1891 through 1910, city hall was considered a courthouse that also housed the police station. Then, in 1903, the city renumbered the street, and City Hall’s address changed to 12 Water Street[3].

In 1899, Dr. E. R. Troxell, a physician, offered the city a lot on Broad St. to build an updated city hall, for the price of $7,500, or $125 per square foot. Dr. Troxell had acquired most of the land from the previous owner, the Pennsylvania Coal Company, who had depleted the land’s coal resources, leaving an empty lot. However, the city council declined Dr. Troxell’s offer, for fears that building on a property where there was a mine would increase chances for the building collapsing.[4] In 1906, the city council contracted some light renovations on the building, which at the time was still considered a court house. Five companies placed bids to paint the building and complete general renovations, and the contract was awarded to the lowest bidder, Thomas Toole.[5] By the 1930s, the city council began to think about a new location for city hall. The current city hall on Water Street was starting to deteriorate.  Plans for the new building were initiated on July 7, 1938 and construction of the building began on November 10, 1938. Pittston Mayor Kenneth English broke ground on the new building with the assistance of John McIntyre of the street department. The total project would cost approximately $90,000–approximately $1.5 million in 2015. [6] There were different companies that city hall had to contract out to get the work done. The city had to hire a general contractor, plumber, electrician and someone to make all the necessary interior work such as furniture and painting. Councilmen during construction were Dr. S. C. Andaloro, Roy Meade, Olgert Pauxtis, Thomas Gallagher, and Joseph Fitzpatrick as city clerk.

Pittston City Hall was also the location of the Pittston Police Department Headquarters, making the building a second home for the police force. From the city’s early days through the 1930s, the Pittston Police Department did not have a regular work schedule for its officers. Most of the police officers worked seven days a week with no break, and had no set shifts. On February 14, 1936, the Pittston council created a law that set a forty-eight hour work week for police officers. They would also have one day off per week, which would be considered an unpaid vacation day for the officers. With a day off, police officers were able to relax and take a rest from their hard work.[7] 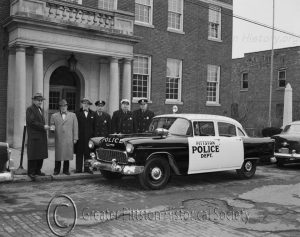 During the 1950s new technology was being produced for police officers. One tool that got the attention of the Pittston Police force were the new radio-phones. The Pittston police force needed a way to communicate with each other throughout the city more efficiently. In 1956, the Pittston police and fire department installed multiple radio-phones throughout the city. The first transmitters were installed in police cruisers, and the main receiver was installed in the police headquarters, inside city hall. The Pittston police force and fire department was happy to have an updated way of communicating. It made it easier to handle problems in the city and keep citizens safer.

Pittston City Hall has been in place on 35 Broad Street since it opened in 1939. It is one of the last historic sites left in Pittston today.

Mayors of the City of Pittston, 1894- Present