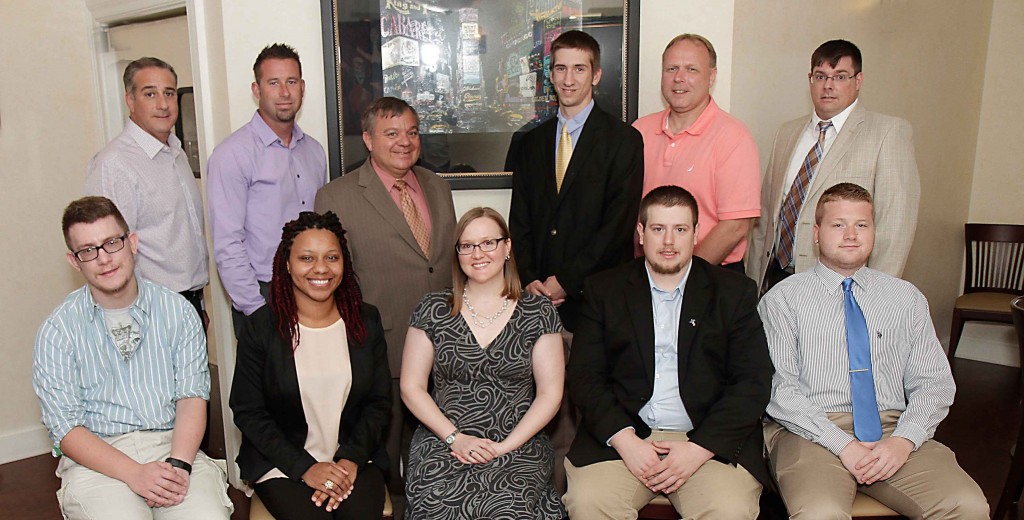 Kyle Coslett (Class of 2016) is a History / Secondary Education major at Misericordia University. He is originally from Kingston, PA and attended Wyoming Valley West High School in Plymouth, PA. As a locally born-and-raised student, Kyle found it particularly interesting to learn about how people from our area survived during the Great Depression and other periods of history. Kyle plans to pursue a career as a middle- or high-school history teacher following graduation.

Patrick Gallagher (Class of 2016) was born in 1972 and served for 23 years as a Non-Commissioned Officer in the Pennsylvania Army National Guard.  His military service includes two combat tours of duty in Baghdad, Iraq as part of Operation Iraqi Freedom.  He currently resides in Dallas, Pennsylvania, with his wife and two children.  At Misericordia University, Patrick is a History Major with a focus on Early American History, and is a member of the Phi Alpha Theta National History Honor Society.  He became interested in history at an early age, and his career with the military enthused his desire to pursue his degree in this area of study.  After graduation, Patrick intends to pursue a Graduate degree in US Colonial History.

Matt Gromala (Class of 2017) was born on July 9, 1994 in Nesbitt Hospital in Kingston, the son of John & Gayle Gromala. He was raised in Pittston, and attended mainly Pittston Area Schools. He graduated Pittston Area Senior High School, Class of 2012.  Matt took a year off after High School to get a taste of the real world before attending college, even making an attempt at US Army Basic Training (which was ultimately unsuccessful, though he did successfully make it through rifle training and the gas chamber). He is a Communications major, with an English minor, entering his third year at Misericordia University in Dallas, PA. Matt plans to graduate in the spring of 2017, upon which time he will a pursue a career writing for newspapers. His goal is to one day end up writing for the New York Times, in a foreign bureau (preferably in Europe).

Anthony Joseph Mancini (Class of 2016) was born on August 9, 1994 in Kingston, Pennsylvania, at the Nesbitt Memorial Hospital. He has lived his entire life in the Greater Pittston area. He was raised in Duryea and then moved to Avoca and still resides there. He attended elementary school in Duryea at Holy Rosary School. He then attended Pittston Area High School and graduated in 2012. He is currently attending Misericordia University majoring in History and will be graduating in May of 2016. His favorite area of history is the Civil War Era and the Reconstruction Era that followed immediately after the war. He has been an active member of the community. In high school he was a member of the National Honor Society and completed community service work, including clean-up projects of local buildings and roads. Following high school Anthony has continued his work in the community by volunteering his time at the Avoca Volunteer Hose Co.

Michael D. McDonnell, Jr. (Class of 2016) was born on November 29th, 1990 in Camp Lejeune, North Carolina to Michael D. McDonnell, Sr. and Emalee McDonnell.  His father was in the Marine Corps, and the family moved around a bit, first going to San Diego, California, then settling in Lake Ariel, Pennsylvania, where his father’s family has resided for decades. Mike graduated high school in 2009 from Western Wayne High School.  He attended Lackawanna College and eventually accepted a football scholarship to Sterling College in Sterling, Kansas, before transferring to Misericordia University. Mike is completing his Bachelor’s Degree in History while coaching football at Western Wayne High School, as his life aspiration is to be a professional football coach.

Nicole Negron (Class of 2016) was born in Jersey City, New Jersey. She is currently a matriculating undergraduate senior at Misericordia University studying English and History. Nicole is the Vice President of Sigma Tau Delta International English Honor Society and president of the History Club. She also participates in many service projects in her community. She hopes to pursue a graduate degree in Public History, where she plans to research the histories of Native American and African American peoples.  Eventually, Nicole would like to work in outreach programs at a prestigious museum. She is a firm believer in the importance of history and education, and her life goal is to bring that which you’d find in museums to schools, community centers, and to those who do not have the means or access to such materials.

Rebecca Schnable (Class of 2017) graduated from Dallas High School in 2013, where she received awards for both her high level of academic achievement and her community service. Rebecca is currently attending Misericordia University where she is majoring in History and Secondary Education with a focus in Public History. At MU, Rebecca is a member of Phi Alpha Theta and the College Republicans, and has engaged in extensive community service with multiple organizations, including the Northeastern Pennsylvania Center for Nursing History, Habitat for Humanity, the Commission for Economic Opportunity, the Red Cross, and the Back Mountain Bobcats Youth Football and Cheerleading Organization. Rebecca hopes to one day pursue a master’s degree in Library Science and a doctorate in Constitutional Law.

Cody Spriggs (Class of 2017) was born on May 22nd 1995 in Nesbitt Hospital in Kingston, Pennsylvania. He is the son of Ray and Barb Spriggs of Dallas, Pennsylvania. He was raised in West Wyoming until he and his family moved out to the Back Mountain, where he continued his education in the Lake-Lehman School District. While at Lehman, he became a United States Student Ambassador that was sent to Japan to strengthen ties between the US and Japan. Upon returning home from his ambassadorial trip, he returned to Lehman and was part of the graduating class of 2013. He then enrolled at Misericordia University as a history major, due to his great respect for history and the events that happened in the past. He’s now currently going into his third year of college, and is changing his major to Government Law and National Security (GLNS). He hopes to one day work in the Pentagon, or even as a United States Secret Service Agent.