As the United States joined the Great War in 1917, concerned Quakers met in Philadelphia to establish the American Friends Service Committee (AFSC).  The founders hoped that they might help conscientious objectors (COs), including Friends and other pacifists, find alternatives to military service.  To this end, the AFSC worked with government officials and others to find alternative work that included driving ambulances and providing medical care to victims of war, including soldiers.  The energy generated by the wartime crisis among the Friends, however, would outgrow the war.  Indeed, some AFSC workers stayed on in Europe after World War I to help to rebuild devastated communities.  AFSC leaders met in Philadelphia in 1924 to discuss the future of the Service Committee, and here they decided to establish the AFSC on a more permanent basis and to pursue an even more ambitious agenda.  While the AFSC would continue its work in Europe, leaders also committed themselves to developing a nascent service program at home in the US, undertaking new work to improve interracial relations, and promoting peace work more successfully.  These broad ambitions would result, in 1947, in the AFSC (alongside its British counterpart) receiving the Nobel Peace Prize. 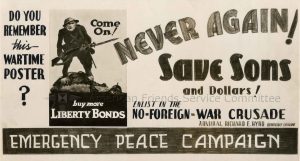 An AFSC poster produced for the Emergency Peace Campaign in 1936. Courtesy of the American Friends Service Committee Archives.

Quakers had quite naturally arrived at the decision to pursue such broad activism through the AFSC.  Friends believed in what some termed “the Inner Light”—referred to by others as “that of God within,” the idea that every individual shared a divine spark—and this foundational belief had long impelled Quakers to activism.  Indeed, Friends had, practically from their founding, emphasized the importance of connecting faith and practice.  Simply believing was not enough; faith inevitably resulted in actions that made belief manifest in the world.  The conviction that every individual had “that of God within” had far-reaching implications when applied to the secular world, perhaps most importantly in suggesting a radical sense of equality among men and women of all faiths and ethnicities.  After all, how could one espouse faith in the Inner Light, and not see all people as equal?  While Quakers at times fell short of such idealism, to be sure, their faith placed them at the center of some of the most important social movements in American history.  One does not have to look very hard, as a result, to find Friends involved with abolitionism, the Civil Rights Movement, or women’s rights, for example.  The AFSC would facilitate such activism after 1917.

As World War I ended, Quaker activists in the AFSC found themselves facing a tension-filled world.  While the “Roaring 20s” may have distracted some Americans from problems at home and abroad, the AFSC worked tirelessly during that decade to address a host of problems, many of which became clear with the onslaught of the Great Depression.  The global nature of the economic crisis, unsurprisingly, pushed the world towards another conflict; World War II would soon arrive, despite the best efforts of pacifist activists in the AFSC.  American victory in WWII hardly fixed things.  While some Americans hoped that victory would bring an era of peace, an inability to get along with the Soviets brought the Cold War instead, which President Harry Truman’s 1947 speech on the necessity of containing communism officially recognized. 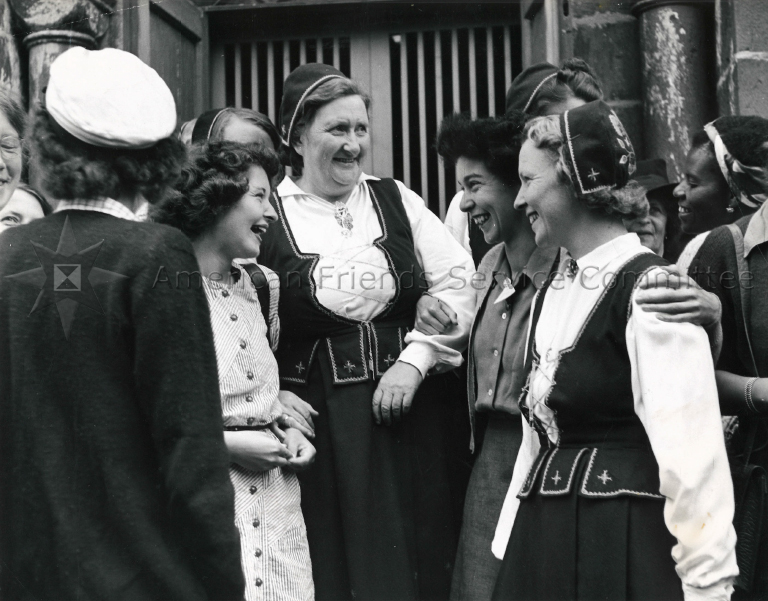 The decades-long showdown between the United States and the Soviet Union introduced the world to nuclear terror, proxy wars, and an uneasy coexistence that often balanced precariously on the principle of mutually assured destruction.  Clearly, these tense times provided the AFSC with any number of avenues to serve as ambassadors of goodwill, working to foster peace and equality as the world lurched from one crisis to the next.

The AFSC responded to such crises in a number of ways, and the projects in “Ambassadors of Goodwill: The AFSC Abroad” trace two important accomplishments of the Service Committee in the aftermath of the Great War.  First, AFSC leaders understood that building a more just world required a collective effort: narrowly defined, top-down solutions had little chance of success.  Thus, the Emergency Peace Campaign of the 1930s worked to mobilize a wide range of voices in support of non-violent solutions to international problems.  In building grass-roots opposition to war, the AFSC drew on its past work that had stressed intergroup collaboration and further established this approach as foundational to Service Committee activism.  The enduring power of this strategy is apparent in the AFSC’s participation in 1967’s Vietnam Summer.  Designed to bring an end to the seemingly endless war in Southeast Asia, AFSC personnel worked to reach both “up” and “down” in mobilizing war resistance.  In this way, the AFSC built connections with nationally-recognized intellectuals and Civil Rights leaders, while simultaneously reaching out to the masses to build a broad-based movement. 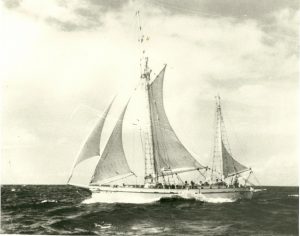 The Phoenix in 1954. This boat would later take Quaker Action Group members to Haiphong, in an illegal trip to deliver supplies to North Vietnamese civilians in 1967. Available online at: http://www.atlasobscura.com/articles/the-american-boat-that-sailed-to-vietnam-during-the-warthen-disappeared

Second, the AFSC refined its Friendly approach of encouraging intercultural understanding via face-to-face contact.  In this way, 1947’s Shipboard Orientation for Operation Understanding cooperated with the United States government to educate students and others who wished to travel to Cold War Europe.  These travelers, under AFSC guidance, became literal (if unofficial) ambassadors, working to improve international empathy and thus remedy the Cold War without military intervention.  Almost three decades later, the AFSC continued to pursue this approach, as the Voyage of the Phoenix demonstrated.  In this case, the AFSC quietly supported the delivery of humanitarian aid to North Vietnam, an action that violated U.S. law.  Once in Haiphong, the Friendly sailors met with the “enemy,” again working on the principle that intercultural compassion might build a more peaceful and cooperative world. 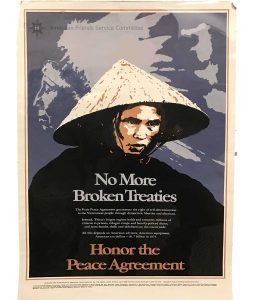 AFSC advocacy for the civilian victims of the Vietnam war continued into the 1970s, as this 1975 poster indicates. Courtesy of the American Friends Service Committee Archives.

Together, these four projects demonstrate the depth of the Quaker commitment to peace activism, as realized through the programs of the AFSC.  Cultivating respect for others and intercultural collaboration, the Service Committee’s humanitarian projects have, over the past century, demonstrated the power of faith-based activism to seek out peaceful alternatives to political, ideological, and economic conflict.  The AFSC has consistently encouraged egalitarian collaboration, bearing witness to the multiple voices that both guide and enact its missions.  While the Emergency Peace Campaign and Vietnam Summer reached both upward and downward to mobilize both grassroots and national activism, the Shipboard Orientation Program and Voyage of the Phoenix reached outward to international constituents to realize AFSC goals for peace.  These efforts in cross-cultural understanding and collaboration have shaped the successes of the AFSC’s past, and will guide it into the future.