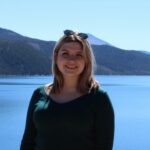 Lately I have been working on an exhibit about Sister Miriam Gallagher, RSM, for the library & archives. It’s been interesting to learn about the Sisters of Mercy at Misericordia; I feel like students don’t know a lot of information about them. Sister Miriam Gallagher was the College Librarian, the College Publicity Director, and she also served a term as the Chair of the English department. She was a dedicated poet and an author of national renown, who also had correspondence with other authors both nationally and internationally. As an English professor, she was responsible for the founding of multiple college publications, including The College Misericordia Digest and The Thinker’s Digest: A Quarterly of Spiritual Readings. Some of Sister Miriam’s poems and sonnets were also included in issues of The Litany, which was actually the yearbook.

I’m happy to be learning the history of the Sisters who founded Misericordia. It is important to remember the dedication and hard work they put into Misericordia, as well as the legacies they left behind.