For my internship this semester with the Sister Mary Carmel McGarigle Archives, my final project was a small digital exhibit on Sister Miriam Gallagher, RSM (1887-1966).

Sister Miriam Gallagher was a dedicated professor of literature, creative writing, library science, and romance languages at College Misericordia. At the college, she served as the Librarian from 1928 to 1938, the Publicity Director from 1930 to 1940, and as the Chair of the English Department for one term. Sister Miriam was known as a prolific writer and editor of national renown, having authored two of her own volumes, Love Is Enough: New and Selected Poems and Woven of the Sky. She also edited Cedar Chips by Father Patrick Augustine Sheehan. In addition to her own books, she was also heavily involved in the student literary journal, Thinker’s Digest, and served as its editor from 1940 to 1957.

In order to prepare for the exhibit, I wrote a biography on Sister Miriam, compiled objects that I wanted to include, and wrote the metadata for those objects. After I completed those tasks, Maureen (the MU archivist) introduced me to Omeka, a digital publishing platform.

I had previously learned of Omeka in the past, however, I had not utilized it myself yet. I was surprised at how incredibly user-friendly it was! Since I already had the metadata for the objects, entering them into Omeka was very simple. Here you can see a few of the fields required for the metadata: 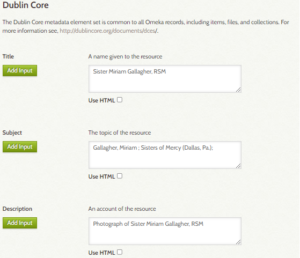 Once I uploaded all of the items and completed inputting the metadata for them, I began to design the exhibit. I specifically wanted to focus on Sister Miriam’s writing career, so the items I included were scans of the covers of Love Is Enough and Woven of the Sky, as well as the covers of three volumes from the Thinker’s Digest. Since this exhibit was on a single case, it was small, but displayed the impact that Sister Miriam left on Misericordia. 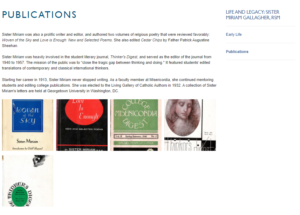 This internship, especially this project, gave me valuable experience with digital exhibits and metadata standards. Omeka is widely used in the field of public history so I was happy to gain some experience with it, as well as learning about Dublin Core, the standard for metadata. This is my third digital exhibit that I’ve curated within my time at Misericordia, and each time I feel like I learn more and more.

You can view this exhibit on Sister Miriam Gallagher, RSM here.