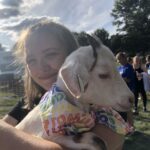 Due to the reopening of the museum for the season approaching, I was tasked with continuing the process of cleaning artifacts. The majority of the artifacts that I was responsible for cleaning were those related to the silk and garment industry in Northeastern Pennsylvania. The machines were used in factories that produced silk, material, and clothing in the first half of the twentieth century. It was important to make sure that I was careful while cleaning the machines for multiple reasons.

When I was not cleaning, the curator, John Fielding, taught me about the process of accessioning and deaccessioning items in the collection. I did not have computer access in order to be able to log items on their digital item management site, but John showed me how the process would go so I had an idea for how it would work later.

We also discussed fulfilling requests from the public who were seeking information. Often times, those who had relatives who worked in the mines will reach out for information about them, asking for documents or other materials. We went through the process of trying to fulfill requests, which was valuable within itself to do. While unfortuante, it is not uncommon that information has been lost because documents have not been saved. In many cases, it is difficult to find what some people request because it simply does not exist in the collection. This is not uncommon in archival collections, and it was interesting to see how even with such well documented mining history there is here, that there still are gaps in the collection.